A Tribute to Snuffy

After reading Mittu's post on Dogs, I am motivated to write about our beloved dog snuffy.

It was the mid nineties and I was probably whiling away time by the name of colleging in Chrompet. We were living in 12th Cross St Extension in New Colony and our neighbour - a paatti used to feed regularly a stray dog called brownie. Every day she would offer food to that stray dog. She would call out loudly after her morning lunch,"browneeeeeeeeeeeeeeee, jooo joooo jooooooo".This jooo jooo joo was thrice exactly. Not more not less.  Down comes rushing brownie, across the gate, to gulp the sour curd rice fed by the paatti.

Brownie- As the name suggests, was brown, unattractive, frustrated dog. He often loitered in the garbage dump a street away. He was stinky and disgusting.


To my memory, Snuffy dear was this browni's son.I cannot recall who was his mother. If someone does, please enter comments.  Though Snuffy was born as a Stray Dog, it had all the vital qualities of becoming our beloved pet. We adopted snuffy when he was 3-4 days of age. He was cute & clean.Snuffy was named after his beautiful velvety snuff  fur - colour. 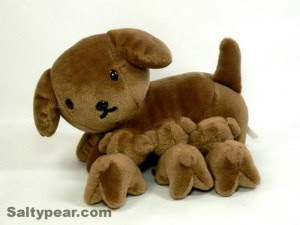 He had long ears which fell on his forelegs. These ears used to communicate very effectively . I will tell you how in the later part of this article.

Snuffy had a beautiful white spot on his forehead almost like a bindi, and his dorsal part of body was fully white. The tip of his furry tail had a white finish. His paws were also white. He was very very attractive and none missed to cuddle him. Snuffy was very well behaved when he was a little pup. We took him out on morning walks, trained him on 'moocha'ing and pottying.

He was dead fond of eating. He kept eating most of the day. On top of it, whatever we ate, must be necessarily offered to him. He would jump up and down restlessly untill he got his share.

My mother had additional hindi tution enrolments just because the word spread across the colony about our snuffy. Children used to be eager to see snuffy. More than writing the lesson on ' kutthaa" they used to be watching the kutthaa most of the time thereby get scoldings from my mom. Snuffy would be tied by the window chained with a cup by its side  which had different things to eat. Sometimes the tution kids fed snuffy with chocolates and biscuits that they got from their homes. Some kids would sacrifice their snack for their love of snuffy. They would carry eatables in their pockets to feed him.

Snuffy would respond to people more with his tail and his ears. He would wag his tail rapidly on seeing his beloved people, like my mom and dad. Especially, when dad arrived after his work, he would get up, pay his respects to dad, and eagerly wait for a piece of bread or rusk that this offered to him after a cuddle and pat.I used to say 'indhaa' (simply without having anything in my hand) and he would be excited hoping that he is going to get something to eat. Just like diamond babu in tenaali, snuffy was a huuge foodie. I often yelled out naaaaffeeeee, kutti payley which became a popular means to comic me by my tution kids.

We took him in our cycle to the local vet for vaccinations and injections when he fell ill. The vet was located in Raanitthottam in Chitlapakkam. Taking snuffy in a cycle would be a proud job as he would always draw people's attention across the MIT gate.

Snuffy was equally loved by our neighbours and relatives who visited us. Jaya Athai and Kumar Mama visited us during summer vacation with Priya and Divya from Trichy. I recall Kumar Mama had written a letter and he had enquired about 'steppy' very fondly.

As snuffy grew up, he became a naughty brat and  uncontrollable within the gates and we left him out of the gate. . But he regularly came home for breakfast lunch and dinner. Mom scolded him for being a Dada like dog in 12th and 13th Cross streets of New Colony. Tution kids complained of seeing him near GST Road, and Pallaavaram Municipality. Mother was worried for him.

Once like all the tragic ending movies, came a dog catcher from municipality. They collected all stray dogs. We had tied a belt in his neck. Still, they took our dear dear snuffy. We rushed to the streets to stop the dog van. How unfortunate, we were told that snuffy had been captured by them. We lost him forever.

He remains in our memories, ever since then.We gave up the idea of bringing up a dog after the loving memories of Snuffy. We thought none can fill the space he left.  I googled for a beautiful snuff dog. Even after searching all over the world, I couldnt find one single picture matching my dear little snuffy. He was one of his kind. Attractive, warm and adorable.

Dear Ananya,
It was really nice reading about your snuffy and it flooded my mind with a thousand memories about our two dogs Dicky and Danny.Dicky(a pomeranian) was a saint dog as I have't heard her being associated with anyone and Danny (Great Dane) a real grihasthan.I remember Danny's pranks quite vividly.When he was a child he used to do pradakshinams of our home with broom in his mouth.He was a terror to all those who were in our colony but he too had hidden fears.He hides himself inside the house for cracker sounds or appakkalai bells.He used to enjoy his luxury bath given by amma and was accustomed to the brahmin diet. When they both left us we felt a void which cannot be filled.I can write pages about Danny as I was more with him ...maybe later....

Hi Manni,
Thanks for visiting my page. Then I can expect your blogs on Danny and Dicky soon. Sounds quite interesting.I recall Snuffy was also dead scared of cracker sounds during diwali. Do write abt these in your blog soon.

Nice post Ananya! its so bad that you lost it.

hey...how could you forget Snuffy's mother? It was an ugly but 'arungunangal niraindha gunavathi' black dog....that neighbour paatti used to call her 'Karuppi'....she also frequented our house for lunch and dinner....but she never used to fight with snuffy or brownie...and if she encountered any other dog on the road, she would immediately stretch her legs and bend over as a mark of surrender.....

wonderful post.. made me to remember my childhood dog friend Maggie.. these dogs gives a real good memory before leaving us..